Is your marketing too Van Gogh? – Why content isn’t king

Is your marketing too Van Gogh? – Why content isn’t king

In a ten year spout, Vincent Van Gough painted 900 pictures selling only one in his entire life until he died in 1890.

All of those masterpieces you’d have thought he’d go viral overnight!

The problem wasn’t his art, the problem was his strategy, simply painting something didn’t gain him any attention!

She moved to Berlin, an artist hub full or art critics where she managed to build relationships with the right people.

She organised exhibitions where they placed lesser known works next to masterpieces to gain more exposure and loaned out his work so many times that people began to recognise it.

By 1892, She’d cracked Berlin, there wasn’t a newspaper without an article about him. She had gained attention.

She then went after the world and established herself in art circles striking deals with international art dealers.

Ten years of hard graft and a never say die attitude, Van Gough was on the map, and in 2018 his sunflowers painting went for £68.4 million.

You’d think it would be easier now more than ever for Vincent’s art to have been found, but could it be the opposite? Think about it.

Jo had something on her side, attention. Back then, it was in abundance.

She didn’t have to push through a wall of people all shouting their message over one another.

And another wall of people, all ignoring that message.

Sure, there might have been other people fighting for the same museum wall, but they’d have had to make an effort to get to Berlin to do it, not just send an e-mail.

To get seen you need grab attention

It doesn’t matter how great your masterpiece, business or video is.

Without attention, you simply can’t progress.

And to gain that, you need a strategy in place but also now more than ever, you need creative and eye-catching methods to earn it.

This won’t happen with any new shiny thing you’ve to throw together in 5 minutes, it’ll happen when you use the most exciting things about your business to promote it.

It’ll happen when you find a different way to communicate than the competition and the other top ten searches on Google.

And it’ll happen when you then take this, apply it to your strategy and consistently hammer it home.

Think about it this way, Van Gough was making masterpieces, and it still took years for him to get discovered and noticed.

Don’t expect your marketing masterpiece to speak for itself, you need to spend more time getting it seen than you did creating it.

Struggling to come up with a strategy or the ideas to get creative with your video marketing?

We’ve made a handy little course to help you work that out, the links below so check it out. 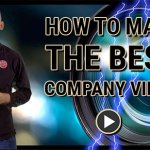 How to make the best company videoBlog Posts, Filming & production 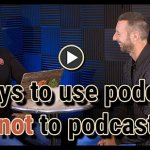 5 Ways to use podcasts not to podcastBlog Posts, Business Unplugged Vodcast, Strategy