The importance of marketing your mission

The Economy Of Why

The importance of marketing your mission.

The importance of marketing your mission

Marketing your mission in business is highly engaging and it’s also good for your own sense of purpose. I’d even go so far as to say it’s been transformative in helping us stay on target when making new content with business people.

But a real danger is lurking beneath. What if the ‘Why’ of your business becomes merely a ‘tick the box’ technique and detached from reality?

So I thought now would be a good time to look at the bigger picture to show that this not just a fad or a gimmick.

This article via a Saatchi contributor: The Value of Creativity in an Economy of Purpose really caught my eye. The title really captures the moment. It made me think of a future where the only products that exist are only there temporarily to serve a public purpose or demand.

Of course, these organisations may indeed employ people, make money, pay taxes and have very nice office furniture – but they have a specific and finite charter. Once their mission is complete, they cease to exist. And the organisation’s energies and resources are re-purposed into something new.

This is not a new idea

As it turns out, this is nothing new or even fairly new. The first corporations were set up by Royal decree – first in the Netherlands and then England – to develop new trade routes. The investment needed was so large and scary that it required multiple investors – even beyond the ability of the crown.

Now, we’ll have to put aside the, frankly racist, cultural prejudices and darker side of colonialism, but it was the civilising mission connected to profit that made those investments possible. And for better or for worse, those trade routes opened up the world.

To be fair those same corporations should have ceased to exist at that point. Instead they tried to linger and finally succumbed to corruption and eventually bankruptcy.  This kind of proves the point that if you cease to have relevance or purpose, you’ll cease to exist one way of the other – like Blockbuster or Kodak.

We’re just not very good at recognising when that point is and moving on at the right moment.

The Supreme Court ruling of 1886 that gave corporations the same rights as a human being paved the way for other countries. Before that, the purpose and charter of any corporation was to serve a public good over a limited time: build a bridge, develop a railway…  basically do something useful.

It’s after the 1886 ruling that our business culture really morphed into existence, profit and survival for its own sake. No purpose, no mission, just pointless churn.

Having a mission is still powerful

Fortunately this isn’t the complete picture. The best organisations in the world today have remembered the original intention of being in business and provide a clear mission regardless of how big they become: Apple, Patagonia, Virgin, Amazon and Moz.

And that mission can be ongoing as long as the problem persists. That’s what Simon Sinek was talking about in his book ‘Start with Why.’

Have a look at the way charities operate. Curing cancer, for example. If we were to find a universal cure for cancer tomorrow then all the cancer charities of the world would cease to exist, obviously. That’s how powerful their sense of mission is.

And it’s working. In the 50s cancer was a death sentence with only a 25% survival rate. Now it’s 63%. There will come a day when all cancer charities cease to exist.

Do you think that would have been possible if the message was: ‘Let’s light a candle and hold hands?’ No, the mission is always: ‘Let’s beat this thing.’

Where does this leave the future?

There is an endless list of stuff that needs fixing in our world.

So, if you’re just in business to pay the mortgage, then I’ve got bad news for you. You’re not going to cut it in the future. You should probably go and work for someone who has a clearly defined mission. You’ll feel better about yourself and you’ll probably earn more to boot.

But I suspect you’ve not come this far believing that, have you?

In fact, I suspect you believe the opposite – you’ve got into business to mess with the system, to make something that’s not good currently work better for more people.

If that’s the case, then shout about it and stick with it until you’ve fixed it. And when you’re ready, move on with your new found skills to fix something else. And repeat…

This way you’ll never be without work, satisfaction, customers or money.

how to use Facebook live for businessBlog Posts, Distribution 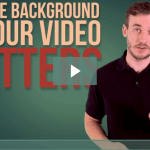 Why the setting and background of video mattersBlog Posts, Filming & production